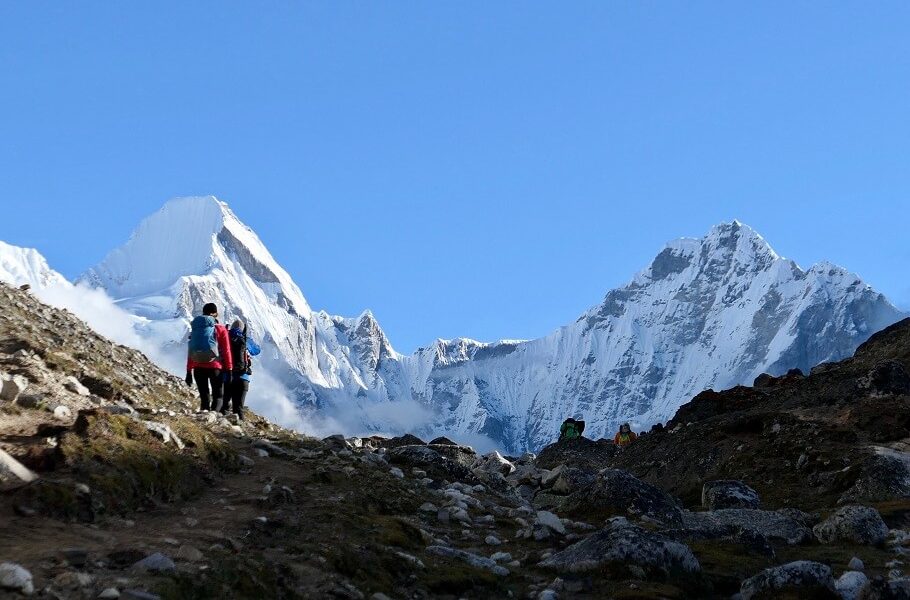 Just after Christmas and New Year has kicked in, winter starts in the Northern Hemisphere. And winter set in Nepal and Everest Camp as well. And you might be tempted to ask, “Is Everest Base Camp trek in January doable?”

And the answer is a big “YES”.

Even in January, the daytime temperature in Everest Base Camp region is around 8-12 degree centigrade which is doable. And the temperatures during the nighttime are not extremely low either.

So, there is no way that you can’t do it in January. The views of the mountains in the winter season are great. They’re glorious and you don’t get scenic views as clear as you get in this season any other time of the year.

The following are things that you need to keep in mind when you choose to trek to Everest Base Camp in January:

1. Altitude of Everest Base Camp

Nepal offers a great range of altitude for all trekkers. And Everest Base Camp is no different.

Kathmandu itself lies at an altitude of 1400 meters, which itself acclimatized you some degree. When you get to Lukla from Kathmandu airport, you’ll be there at an elevation of 2800 meters. At the Base Camp, the elevation will be 5300 meters.

And if you go to Kalapathar, which offers you the best view of Everest, you’ll get to an elevation of 5600 meters.

If you are looking for a long trip to Everest Base Camp that lasts for about 3-4 weeks, you get to the following places and elevations:

Although you might climb a great altitude while traveling Everest Base Camp, you don’t have to worry a great deal about the weather. The weather is predictable. There might be a big temperature difference between the daytime and nighttime, the changes are not unpredictable.

There might be snowfall as well in January. This means that trekking poles will come in handy at this particular month.

The nighttime temperature at the Everest Base Camp in January is between -5 to -12 degrees centigrade. This is not too low.

To give you a perspective, even in the coldest nights in Kathmandu which can be 1-2 degree centigrade, people manage to feel warm and cozy with just a quilt. So with good mattresses and sleeping bags, you’ll feel pretty warm even in the nighttime.

The daytime temperature is around 10 degrees, which is fairly warm. If you don’t have to worry about the night time, what problems do you expect to have in the daytime? 😉

3. Gearing Up for January

January cold means that gearing up plays a vital role. You should take care of your clothing as well as chargers as the solar charges might not have a great backup in January.

4. Advantages of traveling in January

With not much trekkers trekking in January, there are various benefits of trekking in this month.

Although January treks are not terribly difficult, there are various things that you have to consider in order to have a good January trek.

In cold, your body burns more calories than it normally would. So you should keep up your food intake. Food rich in carbohydrate and protein should be considered. Keeping your food intake high and not letting your stomach feel empty is the key to rid the body of other altitude concerns.

Keep the water intake high. Water is a great healer and also plays a significant role in keeping altitude sickness away. Avoid alcohol as alcohol makes your body dry and you might feel effects of dehydration.

Maintain connection with your friends/ family and let them know your whereabouts. If you have a group, walk with them. They’ll give you support to keep moving in the long routes.

There are a variety of travel options for people who want to trek in Nepal. If the weather in January seems too cold for you, you can try out the Helicopter tour to Everest Base Camp. That way you will save a lot of time and don’t have to go through an extensive trek.

Other Treks in Everest Region in January

The Everest Base Camp trek is not the only trek that is available for you. There are other doable treks in the Everest region that you can consider:

If you don’t think you will have enough time to complete the classic Everest Base Camp trek in January due to the lack of time, you can try the Everest Panorama trek. This trek will last 11 days and will give you plenty of time to get familiar with the Everest region.

This trek will take you to Lukla, Phakding, Namche Bazaar as well as Tengboche. This short trek will give you splendid views of  Mt. Everest, Mt. Lhotse, Mt. Thamserku, and Mt. Amadablam. This trip will give you a glimpse into the Sherpa lifestyle as well as culture.

Gokyo to Everest Base Camp trek

If you have plenty of time to get to many places in the Everest region, Gokyo Everest Base Camp trek is the one you should look forward to. This trek which will last for 19 days will not only give you a chance to view the mountains, but also the mesmerizing water resources, culture as well as lifestyle in the Everest region.

In addition to the Everest Base Camp, you will go to Gokyo valley. Gokyo Ri and Chola pass are other two wonderful places to go to in this trek. The impressive views of the Khumbu icefall and glacier will also be other things to look forward to in this trek.

January trek is not difficult as some people make it sound. Yes, the cold might be a tad difficult to bear but the cold is not so extreme that trekking becomes impossible.

There are a few adjustments to make. Perhaps, you have to spend an extra hour or two for acclimatization. You’ll have to sleep well and warm but the availability of many resources means that you can have all the privilege that is available.

But, the trek is certainly doable and plenty of people have found this experience a lot better than trekking in seasons where people are trekking in plenty. Maybe you should try it too!